It is my 100th post. And it is the thirtieth anniversary of President George HW Bush’s signing of the American with Disabilities Act or ADA. I am going to explain why the ADA matters to me.

Why does the ADA matter?

I’m going to quote from my speech at the Minnesota State Capitol Grand Opening 3 years ago where I spoke about disability rights on a panel with Senator Dave Durenberger and Colleen Wieck, Executive Director of the Mn Governor’s Council on Developmental Disabilities. 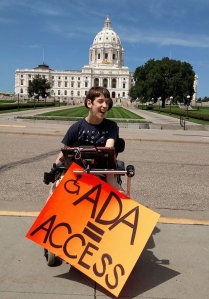 This was three years ago and I am tired of waiting for the ADA to become fully realized – for the day where I no longer have to write accessibility reports about my experiences at local concert venues or try to find an accessible entrance into a restaurant. I shouldn’t have to press elected officials to caption videos. I’m tired of waiting for change for these things that seem like after 30 years of the ADA should be easy – it’s accessibility 101.

I am tired of having to figure out how to navigate services that are supposed to be helping me live an independent life. It shouldn’t take multiple attempts, a call to my US Representative, and then 11 months to be approved for SSI. I shouldn’t have to live in poverty to be able to receive the Medicaid services or SSI that I need to simply live. I want to do more than simply live – I want equality. I’m going to be 22 years old next week and I’m thinking I shouldn’t be this tired already…

Rebecca Cokley writes in 30 Years Later, the American Dream is Still Not ADA-Compliant:

“For decades before the ADA, people with disabilities — all 61 million of us, who exist in one-third of households — were institutionalized, kept hidden out of shame, and isolated from society because of a lack of access. The legislation protected us from discrimination and increased our participation in public life.

“But while disability issues have become more mainstream in our culture, we still have a long way to go to reach true equality and justice…Simply put, there are structures put in place with the intention of keeping people with disabilities poor, even at the most prosperous times in our country’s history.”

What I am discovering, is that the systems put in place for me to live in my community, mean that I have to live in poverty. There are asset limits for SSI and for Medicaid and I absolutely need Medicaid to help provide the 24-hour staffing, healthcare and equipment not covered by my parent’s health insurance. What dreams do I get to have for my future?

I think it is time to do more, don’t you? It’s time to continue the process of fulfilling the promise of the ADA so that people with disabilities can reach true equality and justice.

Hold only love, only peace in your heart, knowing that the battle of good to overcome evil is already won.  Choose confrontation wisely, but when it is your time don’t be afraid to stand up, speak up, and speak out against injustice. 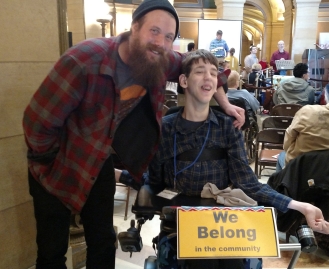