My first time as a delegate to the State Democratic Farmer Labor (DFL) Convention was definitely exciting and suspenseful! I met some amazing people and loved seeing the political process in action.

Thanks to ABC-6 in Rochester for noticing my blog, reaching out, and then sending a wonderful reporter, Noelle Anderson, to interview me about my experience as a first-time delegate. Here’s the link to the DFL Delegate Strives to Give a Voice to Those Without One report from ABC-6 KAAL-TV. Enjoy!

(ABC 6 News) — There are 3,000 extra people in Rochester this weekend for the state DFL Convention. Half of those are delegates.

One of those delegates is Justin Smith, a public speaker, blogger and disability rights advocate. He’s only 19 years old, and he’s already become a leader for people with disabilities.

“It is important for me to make my voice heard, and show up and to be an advocate for the change. That’s why I am a delegate,” Justin said. “It’s important that people with disabilities are included in meaningful ways. That includes being involved in the political process.”

Justin lives with Athetoid Cerebral Palsy. He uses a communication device to talk, and that device, as well as his power chair, comes at a cost, which is why he’s advocating for support, to make sure anyone who needs technology and care- gets it.

“He’s able to share his unique perspective on how we can all make this work better. He needs support and full-time staff and health care and special equipment, accessible technology. Technology is key for this kid. It’s his independence,” said Kris Schulze, Justin’s mom. 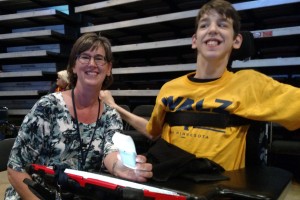 “There have been real threats to medical assistance and health care which mean very real threats to people with disabilities. We need more options for self-determination. I want to live with as much choice and independence as possible. Isn’t that what anyone would want?” Justin explained.

“I am terrified that many of us with disabilities who need Medicaid will lose our freedom to choose how to live our lives. This support matters. It helps me make an impact on the world,” Justin said.

This leadership role isn’t new for Justin. Last year he was featured in Microsoft’s Inclusion in Action Video series.

Justin also has his own blog called Justin Smith Writes.